In the wake of the return of Netanyoohoo and the annexation of the west bank, it sounds like they are getting serious about settling it by force.

ActivityPub remains an excessively chatty protocol, and they layer on retarded levels of server side caching atop that. Idea: do all this crap in JS, so that at least you only get a request for content when people actually view it.

The Political Marginalization of the Ordinary Person 🔗 1668706080

A guy comes to the same conclusions as much of the right has, but from a fresh direction out of the left. It is worth noting that this professionalization of the political class and its attendant complexity is straight out of Tainter's "Collapse of Complex Societies". People overcomplicating their lives on even a personal level almost always is the cause of relationships to collapse; it is the same with polities.

His whole substack is worth reading. It's enormously promising to see a progressive realize what we've been saying ever since they took us off gold and BTK'd us in red tape. Capitalism didn't fail, it was murdered!

Hey, when it comes to scamming uncle sucker nobody else comes close! An integral nationalist Jewish Slav frankenstate doesn't have to make much sense, just like a colonial apartheid state of the same in the Levant doesn't have to either.

UPDATE: Thierry has a great piece on the history of the Ukie Integral Nationalist movement. Worth particularly noting their tight integration with GLADIO and the crazies in the basement. This means the bureaucracy at state will never, ever give up on them.

Rumors of the demise of the parasite class are always exaggerated. They only get larger until they kill the host. This is but a temporary setback; they'll soon find a way to be commissars again.

Gleichschaltung. But this time it's emerging naturally, because that's what gets the most engagement. Turns out exploiting the demonically oppressed is one hell of a cash cow, and has taken on such a life of its own as to be in the drivers' seat.

It's the same with all the content mills. Consent factory. Whole thing coordinated by the DHS.

Glad to see all the parties involved could look past their conflicting claims and do what's best for their economy and people.

He's quite astute to see the real aim of Washington is the dissolution of Russia. These days I put it to most people as "UMM SWEETIE ITS TRANSAMUR..."

Sounds like they came over for a friendly visit and he gave the wrong answer.

Which of course also means the users can be pinpoint targeted whenever the NSA insists they tap in, if they haven't already.

The Civil Rights act is what foisted this public-private partnershit of corporate coercion everywhere upon us. The feckless Rethuglicans won't touch it.

Means ASML can't do business in China. Won't work, most of the Photolith expertise they acquired was leakage from Taiwan anyways.

OPEC has 'em by the short and curlies, and knows it. It'll be interesting to see if this actually results in a diplomatic realignment of the Arabs. I would expect retaliatory CIA chicanery to be not long behind if so.

Maybe if you didn't classify the bejeezus out of everything and scream STRENG GEHEIM until anyone with an IQ above room temperature refuses employment with you, nukes wouldn't have to be reverse-engineered from first principles every generation

Killing processor fees will be a great boon to the economy. I suppose it will help the bottom line of JPM's portfolio more than it hurts their own fee income.

Sounds like they want all their lines fully staffed so they can actually push all the way to the Dneipr. The question from here is how will the west now escalate?

Regulatory hasn't changed it's tune since FDR's day. Keep it all in the ground so we are supreme on some theoretical day which will never come that we are the last ones holding everything.

For being a troublemaking Journo. The Tel Aviv regime will of course get away totally with this. 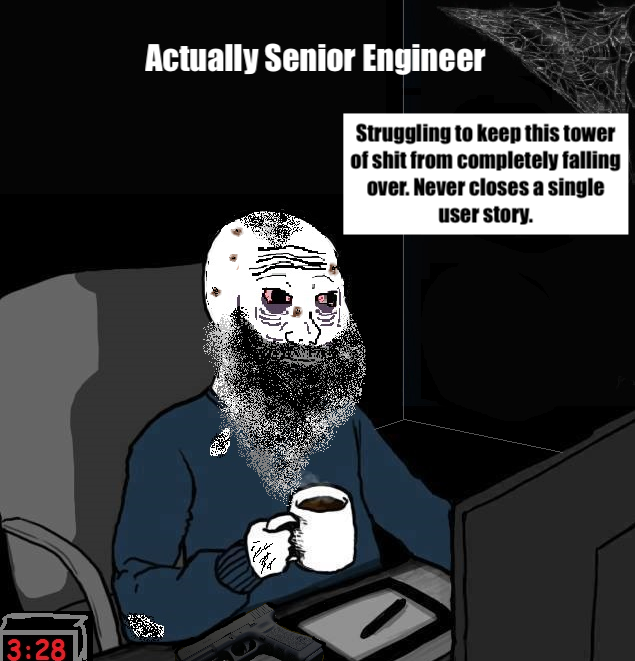 Much hay has been made of late regarding this phenomenon of "Quiet Quitting" in corporate jobs. This is a euphemism for being checked-out. It is only of concern to the powers that be insofar that they are noticing increasing numbers of their long-suffering productive employees finally shrugging. They do not care at all about the fact that their firms are packed to the gills with useless dingleberries who are at best a deadweight loss, but most of the time smother the place with their defectiveness.

The reason this is not discussed is for two reasons. Management, thanks to their selection mechanism being a single-elimination ass-kissing tournament, is staffed exclusively with acephalous, spineless empty suits. The deadweight also can't be fired thanks to the "Civil Rights Restoration Bill" resulting in a widespread perception that if you ever fire degenerates or diversity hires you will get cut off from uncle sucker's tit. This results in the most demoralizing of all possible environments for the able. Ruled by your inferiors, and paid the same as people who are at best useless, but usually fuck things up nonstop.

Put together you realize that the modern corporation is little better than a public/private partnershit built to emulate the WPA/CCC in the most cancerous way possible. It has good explanatory force for both quiet quitting and the extreme degree to which "too many chiefs" syndrome dominates corporate. Productive staffing levels have remained relatively constant relative to population, while administrative employment has ballooned. The government has essentially dragooned the firm into preventing mass unrest via buying off the useless just long enough to become "disabled" or get SSI. Meanwhile, the few productive foolish enough to be employed in these firms enjoy an ever-increasing workload thanks to resources being crowded out by the useless.

In short, not only is the macro picture totally a wreck thanks to the effects described in my previous post, but at a micro level everything is conspiring against us optimizing and automating our way out of the problem. Nearly every single firm in existence is held together by these "glue stick" people (see illustration) that are all either nearing retirement or the limits of their patience.

This reminds me of the picture painted by Gunter Riemann in "The Vampire Economy". The NAZI economy could not function to the extent that it (barely) did without running everything at 125% capacity and foregoing all maintenance. A system operating along such lines could only operate thanks to being propped up with expropriation and murder. I have my doubts that the glad-handing sissies running our system have the stones to do what it takes to keep things going. About the only thing they will stoop to is prison slave labor and indenture of immigrants, the latter being the primary source of enthusiastic, albeit less than competent, workers left in corporate.

After getting freaked out by inflation caused by the rounds of helicopter money sent out after the economy was smothered for a head cold, the fed and their equivalents in the west have committed to raise rates until the problem is solved. It won't work, because they are solving the wrong problem.

Western governments (with a few notable exceptions) have more or less systematically adopted a policy of hostility to increasing production of goods and services. They have also systematically suppressed transitions to more dense and reliable energy sources at every turn. These policies are all done for noble sounding reasons having no consideration whatsoever for the structure of production and especially it's impact on the price level.

Ceteris paribus, a drop in output will always lead to a rise in prices. The western keynsian system (fascist economics) has relied on ever-increasing production reducing the cost of goods and services faster than money supply growth. Policy decisions to smother nearly all production and energy projects in red tape over the last fifty years have allowed some industries to tread water, but in general a slow de-industrialization has occurred. The only places the price level continued to reduce in my lifetime has been the high tech sector which is just now beginning to get BTK'd in red tape.

Still, this allowed us to just barely keep living standards around 1970s levels supposing you allowed some "hedonic adjustment". Which is to say lowering the standards of living to no longer include having a household until mid 30s or even 40s for most Americans. It was not until our wise overlords decided to douse the economy with asbestos over a cold that hostility to production and energy accelerated to the point you might be forgiven for thinking they've gone rabid on us peasants.

Fresh on the heels of that event which cratered production and papered it over with helicopter money, we now have western brain-dead energy policy biting off our heads. Factories all across europe are having to shutter, and it's likely this winter many will simply freeze to death for lack of affordable fuel. This is a result of 50 years of total opposition to the development and usage of ever denser sources of energy (fossil and nuclear fuels). This is purportedly for environmental reasons, but the impact of having to mine & harvest less, more dense material should be obvious. If an ounce of uranium is worth a ton of coal, you can close better than 9 out of ten strip mines.

Nevertheless, the obsession is with the least dense energy sources, such as the movement of the air, photons and the fusion of hydrogen. It does not take a genius to figure out that a systematic bias towards increasing the unit cost per KwH will reduce total output thanks to raising the COGS. This bias has been so awful that much of Europe had no choice but to import nearly all energy from the Russians, who have now cut them off for throwing a tantrum about Ukraine. This is the precipitating event for our current crisis; a necessary but far from sufficient cause. Real blame lies with bad energy and industrial policy for decades.

This one-two-three punch has resulted in a knockout blow for western production. The only thing that reduction of the money supply via rising interest rates can do is lower prices. This is cargo-cult economics; it will do nothing to change the very real fact that too few goods means a lower standard of living. As long as the rate of production falls faster than the money supply (which it will for some time), inflation will remain uncontrolled. The FED and central banks can do nothing whatsoever about bad fiscal, industrial and energy policy.

Ultimately a unified policy aimed at increasing standards of living via increased domestic production of goods and services, higher productivity, price and regulatory stability would have to be adopted. This will not be done until all the deranged bureaucrats are either sacked en masse or filter out from age-attrition. The likelihood of the former remains low, so the only way out is death. It's a hard way out.

If delusional policy is kept around long enough, the problem will resolve itself thanks to our impending demographic collapse resulting in persistent demand destruction. Maybe that's the Fascist policy of the future. Make sure that demand is dropping faster than production so you can juice money supply growth and keep the plunderbund rolling. Japan truly is the land of the future.